Wells’ syndrome is a rare inflammatory skin condition of unknown etiology, characterized by recurrent erythematous urticarial plaques and dermal eosinophilic infiltration. We present two cases of bullous Wells’ syndrome in pediatric patients. This condition, especially the bullous type, is rarely seen in children and is often mistaken with cellulitis.

A 9-year-old boy presented to our clinic with pruritic erythematous skin lesions on his face and trunk. There was no history of recent traveling, insect bites or systemic symptoms. The patient had similar, prior episodes involving his hands and forearms that have been treated as cellulitis with antibiotics by the pediatrician. Physical examination revealed urticarial plaques with central vesicles and blisters on face, trunk and extremities (Figure 1). Laboratory tests included a normal blood count and normal differentiation and a slightly raised erythrocyte sedimentation rate (ESR). Skin biopsy showed intra-epidermal vesicles with diffuse eosinophilic dermal infiltrate and flame figures, consistent with bullous Wells’ syndrome (Figure 2a and 2b). The patient was started on systemic antihistamines for two weeks. However, as the rash continued to relapse and remit, he was given topical corticosteroids in adjunct. He showed improvement of his skin lesions with gradual resolution of lesions at his three-month follow-up visit with no recurrence reported afterwards. 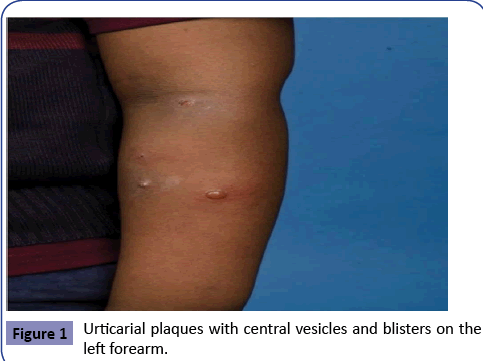 Figure 1: Urticarial plaques with central vesicles and blisters on the left forearm. 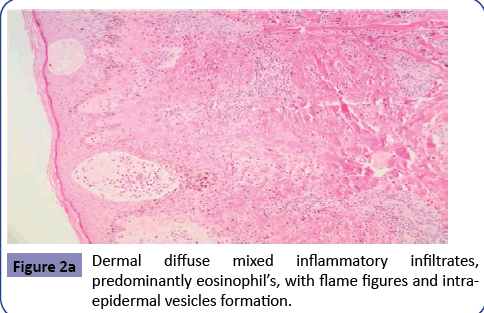 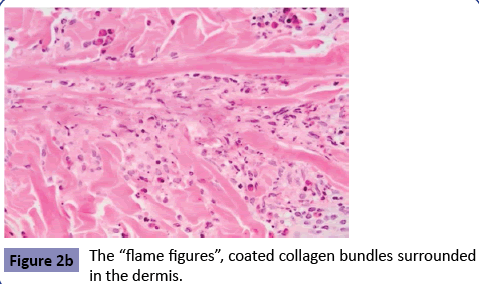 Figure 2b: The “flame figures”, coated collagen bundles surrounded in the dermis.

A 10-year-old girl presented with one-month history of erythematous skin lesions and blisters on her trunk and extremities. She had no history of insect bite, recent traveling or systemic symptoms. She was initially treated for cellulitis with antibiotics for ten days without success. Physical examination revealed urticarial plaques with central blisters on her trunk and extremities. Laboratory investigations showed mild peripheral eosinophilia and a mildly elevated ESR. Skin biopsy revealed the presence of eosinophilic infiltrate and flame figures (Figure 3). The child was subsequently treated with systemic antihistamines for two weeks. However, with no remission of her skin lesions, the patient was commenced on a short course of prednisone for five days in adjunct to systemic antihistamines and her skin lesions resolved within the next few days. She had another new episode within one month of prior visit, which required another short course of prednisone. The patient did not show up at her annual exam and was later lost to follow-up. 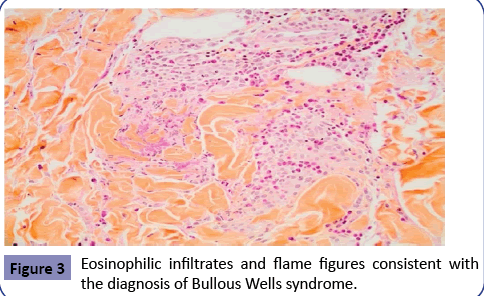 Eosinophilic cellulitis or Wells’ syndrome was first described in 1971 by George Wells as a recurrent dermatitis with eosinophilia [3]. Wells’ syndrome patients often present with erythematous edematous pruritic plaques resembling cellulitis, which develop over a few days with a progressive involution over a period of 2-8 weeks, occasionally resulting in residual skin atrophy and hyperpigmentation. Recurrence with exacerbations and remissions over months or years are common.

Wells’ syndrome can also present with papulonodular, annular plaques and vesicobullous lesions [1,2]. Bullous Wells’ syndrome, which presents with blistering, is not very common in childhood with only 13 pediatric cases, including our two cases, reported [4-12] (Table 1).

The course of the disease can be divided into three distinct histopathologic stages. During the acute stage, there is a marked dermal edema and a predominantly eosinophilic infiltrate of the upper dermis [4,6]. As the lesions evolve, the eosinophils degenerate and deposit eosinophilic major basic protein onto collagen fibers, creating the classic flame figures [13]. The resolving phase is characterized by flame figures surrounded by palisading histiocytes [1,4,6,14]. Increased levels of interleukins-5 (IL-5) and eosinophil cation protein (ECP) have been observed during the active phase of the disease. Interleukin-5 has a fundamental role in mobilizing eosinophils from the bone marrow; it also promotes eosinophil skin homing by altering expression of adhesion molecules [15]. With the activation of the eosinophils, granular proteins are released into the surrounding tissues, causing edema and inflammation.

However, the pathogenesis of Wells’ syndrome is still not well understood. It has been postulated that a hypersensitivity reaction to various exogenous or endogenous stimuli, such as arthropod bites, drugs, viral and parasitic infections, induces blood and tissue eosinophilia with subsequent dermal eosinophilic degranulation causing edema and inflammation [5]. However, most cases of bullous Wells’ syndrome in children remain of unknown etiology. Of the 13 pediatric cases of bullous eosinophilic cellulitis reported to date, half of the patients (6 of 13 cases), including our two patients, had no identifiable precipitant factor. Of the seven cases having reported a triggering event, four were linked to insect bite and three cases were attributed to infections (one associated with parvovirus B19, another to an upper respiratory infection and the last due to an unspecific viral infection) [4,6,8-10,12].

Peripheral eosinophilia is common but not always present. Eosinophilia levels have been found to fluctuate throughout the course of the disease and to return to normal range on remission [15]. It was found in most reported cases (10 of 13 cases), including one of our patients (Case 1). Elevated ESR is also rarely seen in pediatric eosinophilic cellulitis patients. A slightly elevated level of ESR was observed in three cases, including our two patients [16].

Wells’ syndrome is usually not associated with systemic manifestations. Fever, lymphadenopathy, arthralgia and other systemic symptoms have been described in eosinophilic cellulitis patients. These findings in children, especially with specific organ involvement, may be indicative of a more severe or progressive course of the disease [5,16]. Of the 13 cases of Wells’ syndrome in childhood, only three patients reported fever. Of those, two were diagnosed with eosinophilic cellulitis triggered by an insect bite and the third, by an unspecific viral infection [4,6].

Although Wells’ syndrome usually improves greatly with lowdose systemic glucocorticoids, it may also spontaneously remit or be controlled with topical corticosteroids and systemic antihistamines. In recalcitrant cases with inadequate response to oral corticosteroids, alternative treatments, including dapsone, cyclosporine, azathioprine and interferon-α have been employed [5,8,12,17]. Out of the 13 reported cases, ten were treated successfully with oral or topical corticosteroids, one resolved spontaneously and the last two cases, unresponsive to topical and systemic glucocorticoids, showed improvement with the use of oral dapsone [4-12].

Bullous Wells’ syndrome is often misdiagnosed as cellulitis with bulla formation or exaggerated bite reaction due to its similarity in presentation. The differential diagnosis of bullous Wells’ syndrome is broad and may also include urticarial vasculitis or autoimmune bullous dermatosis, such as juvenile bullous pemphigoid, dermatitis herpetiformis and bullous lupus [18]. Misdiagnosis leads to delay of pertinent treatment and inappropriate use of antibiotics. Seven patients of the 13 reported cases were unsuccessfully treated with antibiotics at first. Five patients, including our two cases, were first misdiagnosed as bacterial cellulitis and one other case was initially found to be an insect bite reaction [4,5,8,9]. The last case was wrongly identified as scarlet fever and then later as an acute urticarial [11]. Thorough history and physical examination may reveal the appropriate diagnosis. However, in some cases, skin biopsy is necessary to establish the correct diagnosis. Although not pathognomonic, the presence of eosinophilic infiltration of the dermis and flame figures is quite characteristic of Wells’ syndrome [9].

In conclusion, although bullous variant of Wells’ syndrome is a rare entity in childhood, it still needs to be considered in the differential diagnosis of recurrent bullous skin eruptions in pediatric age group to avoid unnecessary and ineffective use of impertinent medications.

The authors have nothing to disclose.