Background: Atopic eczema (AE) is a very common chronic skin inflammatory disease of pediatric age. Skin xerosis and itch are the hallmark of the disease pointing out that skin barrier alteration is the background condition of AE. Skin barrier alteration could favour S. aureus colonization which in turn could be a process involved in AE flares. Due to their positive effects on skin barrier functions emollient and moisturizing compounds are considered a mainstay therapy of AE. New emollient and moisturizing facial and a body creams containing L-isoleucine, ceramides, niacinamide and rhamnosoft have been recently developed (Pro-AMP body and facial creams). The composition of these creams could act on different aspects of skin barrier defects improving skin barrier functions in AE. In particular L-isoleucine and its analogues are highly specific anti-microbial peptides (AMP) inducers in epithelial cells.

Study aim: We evaluated in a prospective assessor-blinded clinical evaluation study, the effects of pro-AMP facial and body creams on clinical evolution, itch and S. aurues colonization in children with mild-to-moderate AE.

Conclusion: These new Pro-AMP facial and body creams containing isoleucine, ceramides, niacinamide and rhamnosoft have shown to be effective in reducing signs and symptoms in mild-to-moderate chronic lesions of AE of the body. Treatment was also associated with an improvement on lesion skin dysbiosis.

Atopic eczema (AE) is a very common chronic skin inflammatory disease of pediatric age [1]. It affects 15%-20% of childhood population [2]. Skin xerosis and itch are the hallmark of the disease [3], pointing out that skin barrier alteration is the background condition of AE [4]. Skin barrier alterations such as xerosis [5], increased skin pH, alteration of innate immunity with a reduction in anti-microbial peptides production [6], could favour S. aureus colonization which in turn could be a process involved in AE flares [7]. S. aureus infection is, in fact, the most common complication of AE and it is involved in the worsening of the disease [8]. Due to their positive effects on skin barrier functions emollient and moisturizing compounds are considered a mainstay therapy of AE [9]. Emollient therapy could also have a beneficial indirect effect on normal skin micro biome [10]. New emollient and moisturizing facial and a body creams containing isoleucine 2%, ceramides 0.01%, niacinamide 1%, dimethicone 1.7% and rhamnosoft 0.2% have been recently developed (Pro-AMP facial body cream). The composition of these creams could act on different aspects of skin barrier defects improving skin barrier functions in AE. In particular L-isoleucine and its analogues are highly specific anti-microbial peptides (AMP) inducers in epithelial cells [11]. In addition rhamnosoft could interfere with the adhesion of S. aureus on the skin [12]. Therefore the peculiar composition of these emollient creams could be particularly effective in children with AE not only improving skin barrier but also strengthening some skin innate mechanisms like AMP production.

We evaluated in a prospective assessor-blinded clinical evaluation study, the effects of pro-AMP facial and body creams on clinical evolution, itch and S aureus colonization in children with mild-tomoderate AE.

In a no-profit, two-center, prospective, assessor-blinded, trial children between the age of 6 months to 14 years with AE of the face and body were enrolled. This study was conducted in two Pediatric Clinics in Italy (Clinical Trial number: ISRCTN24922464). After obtaining institutional review board approval and parents informed consent, we studied subjects with mild-to-moderate AE. A total of 45 children (24 girls and 21 boys; mean age 5 years) participated to the trial after their parents’ written informed consent. Diagnosis of AE was performed according to Hanifin and Rajka criteria [12,13]. Main exclusion criteria were severe AE, recent (i.e., <4 weeks) treatment with systemic or topical steroids, calcineurin inhibitors, or topical and systemic antibiotic drugs, or use of intranasal topical mupirocin. Study took place in two pediatric outpatient services centers in Italy between January and September 2015. For lesions on the face a cream containing isoleucine 2%, rhamnosoft (Gum2) 0.2% and ceramides 0.01% (ceramide 3 and ceramide NP) was used (Nutratopic pro-AMP facial cream, Isdin SA, Barcelona Spain). For lesions located in upper and lower limbs a cream containing isoleucine 2%, rhamnosoft (Gum 2) 0.2%, ceramides 0.01%, niacinamide 1% and dimethicone 1.7% was utilized (Nutratopic pro-AMP emollient cream, Isdin SA, Barcelona Spain). Treatments were applied twice daily, once in the morning and once in the evening, for a 8-week period on the affected areas (face, neck, upper limbs, body and lower limbs). The mean amount of products used was 18 Finger Tip Units daily (9 g). Eczema Area Severity Index (EASI) score (for face/neck, and for the body: upper limbs and lower limbs) scoring redness, thickness scratching and licheni?cation was assessed using a 4-point grading score (from 0: absent, to 3: severe) and evaluated at baseline, month 1, and month 2. Evaluation of EASI scores were performed in an assessor-blinded fashion. Itching was evaluated using a Visual Analogue Scale (VAS) from 0 (no itch) to 10 (very severe itch). Skin swabs for detection of S. aureus were obtained from at least three lesional skin sites at baseline and at month 2. Protocol-specified primary outcomes of the study were the evolution of EASI and VAS itching scores. Secondary outcome of the study was the evolution of the percentage of subjects with positive swabs for S. aureus. Samples were collected by a modified skin scrub technique with a cotton swab. A swab was wetted in 5 ml of Williamson-Kligman buffer at pH 7.9 containing 0.01% Triton X-100. The study was conducted in compliance with the Helsinki Declaration principles and in accordance with the International Committee for Harmonization Guidelines for Good Clinical Practice [14].

Statistical analysis was performed using Graphpad-TM (SanDiego, CA, USA) statistical software. We used the Wilcoxon paired test for the primary outcomes evaluation (evolution of ESI scores) and the VAS score. The Fisher’s exact test was used for thecomparison of percentage of S. aureus positive subjects during the study. Continuous data are expressed as means and standard deviations (SDs). According to the study design not a formal calculation of sample size was performed. We decided to enroll at least 40 subjects.

Table 1 shows the demographic and clinical characteristics of the 45 enrolled subjects at baseline. All subjects concluded the study period. At baseline, ESI facial, and body (upper limbs and lower limbs) scores, mean (SD), were 4.0 (2.2), and 3.3 (2.2) respectively. Itch VAS score at baseline was 6.4 (2.8). Nine (20%) subjects were positive for S. aureus at baseline. In patients with positive swabs for S. aureus at baseline, EASI score was significantly higher (+37%) than the EASI score in the group negative for S. aureus, (p=0.03), confirming that the presence of these bacteria is linked to a worse clinical presentation. In all the treated subjects EASI scores significant decreased by 50% (facial) and by 52% (body) at month 1. At month 2, EASI facial and body scores decreased by 75%, and 79%, respectively (Figure 1). Itch VAS score was reduced by 42% at month 1 and by 66% at month 2 (Figure 2). All but one subjects with S. aureus at baseline had negative skin swabs at month 2 (p=0.002; Fisher exact test). 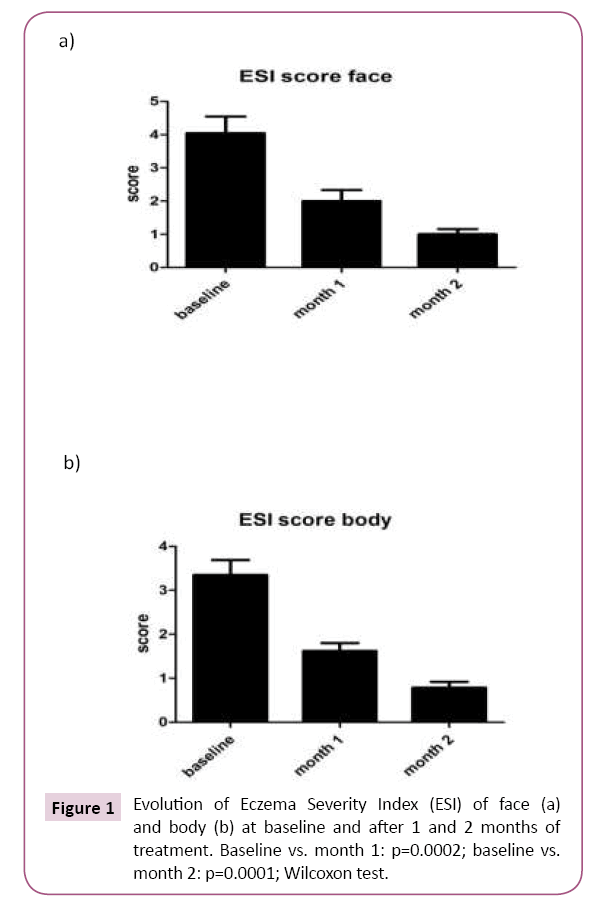 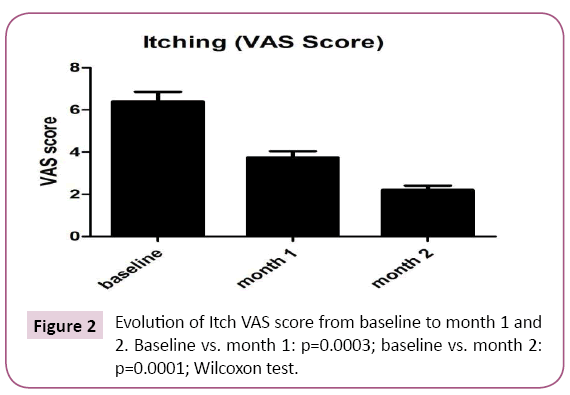 The skin barrier plays a vital role for the organism, preventing percutaneous entry of patogens into the body, modulating thermoregulation and maintaining a proper hydration of the skin [15]. An alteration of skin barrier functions has been documented in atopic eczema, both in affected areas and in normal appearing skin [16]. In particular xerosis is a hallmark of AE and affects both lesional skin and also unaffected skin regions [17]. In addition a relevant function of skin barrier is linked to the innate immunity mechanisms [18]. Keratinocytes produce anti-microbial peptides (AMP) and the skin acid pH offer additional protection against pathogens [19]. For example keratinocytes are able to produce and storage in the lamellar bodies cathelicidin [20]. In subjects with atopic eczema a defective production of AMP has been demonstrated [21]. Atopic eczema skin is characterized by a dysbiosis status in which the presence of normal “protective” bacterial strains like S. epidermidis could be replaced by an abnormal proliferation of S. aureus [22]. S aureus colonization in AE subjects is involved in the worsening of the disease and AE exacerbation are associated with a decrease in microbial diversity (dysbiosis) on lesional skin [23]. S. aureus is able to secrete exotoxins with super-antigenic properties [24]. On this respect, systemic or topical antibiotic therapies could be an important component of AE treatment when there is a super-infection. However diffuse use of antibiotics could facilitate the spread of methicillin-resistant S aureus (MRSA) strains which in turn could be a therapeutic challenge: a recent meta-analysis shows that there is a clear association between exposure to antibiotics and MRSA isolations [25]. In addition in subject with AE but with not S. aureus super-infection a recent meta-analysis [26] evaluating different anti-staphylococcal interventions has shown that none of the studies showed any clinical benefit. Emollient and moisturizing products with the aim to improve skin barrier properties of AE subjects are now considered a fundamental approach in the strategic treatment of this skin condition [27]. Improvement of skin barrier functions (water content, normalization of skin pH) can “per se” improve also the innate immune defenses of the skin. Recently, Seite et al. [9] have demonstrated that the use of an emollient is associated with an improvement of skin microbiome in AE subjects. However there are not so far topical emollient or moisturizing products with specific components which could improve in a direct manner the innate defensive mechanisms of the skin and in particular the production of AMP. In the present study we evaluate the effect of two topical products containing rhamnosoft, isoleucine, niacinamide and ceramides. Topical ceramides could restore the altered skin barrier in AE [28,29]. Rhamnosoft is a rhamnoserich polysaccharide with high affinity tokeratinocyte receptors sharing anti-inflammatory and antibacterial adhesion properties [30]. In addition rhamnosoft could interfere with the adhesion of S. aureus on the skin. Topical isoleucine has shown to stimulate a skin level production of AMP [31]. Isoleucine is also able to potentiate the functional activities of beta defensin, increasing its chemo-attractant activity. Therefore the use of topical anti-inflammatory, emollient and moisturizing products containing also compounds which could improve the innate immunologic system of the skin such as isoleucine could be a further step in the rational topical treatment approach in AE. In this study we have shown that use of rhamnosoft, ceramides, niacinamide and isoleucine facial and body creams improve significantly signs and symptoms in children with mild-to-moderate AE. These data confirm the results we have observed in a multicenter, controlled, comparative study carried out in 105 children with atopic eczema of the face. In addition we have observed that after two months of application of the creams there is an improvement of the dysbiosis status observed at baseline in roughly 1/3 of this sample. Some limitations should be taken in account in evaluating the results of the present study. First this was not a randomized double blind trial. In order to increase the internal validity of our trial we adopted an assessor-blinded clinical evaluation approach regarding the primary outcome i.e., evolution of ESI score. A second aspect is related to the fact that we enrolled mild to moderate AE subjects therefore the results of our trial could be not applied in AE subject with acute flares. The pathogenetic role of S aureus colonization seems more correlated with severe form of AE in comparison with mild to moderate cases. However in the subset of subjects with positive S aureus we found that baseline ESI score was significantly greater than the ESI score of subjects with negative S aureus swabs suggesting that also in mild to moderate cases the presence of S. aureus could be linked with a more severe clinical manifestation of the eczema. The application of the study creams was associated with an improvement of this dysbiosis status in this subset of subjects. These data suggest that also in mild to moderate AE the normalization of skin microbioma could have positive effect in the clinical outcome.

These new Pro-AMP facial and body creams containing isoleucine, niacinamide, ceramides and rhamnosoft have shown to be effective in reducing signs and symptoms (itch) in mild-to-moderate chronic lesions of AE of the body. Treatment was also associated with an improvement on lesion skin dysbiosis.